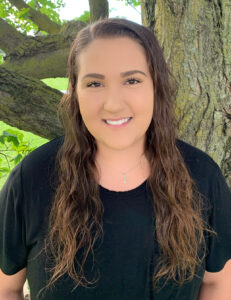 Growing up my life appeared to be very normal from the outside looking in. I had friends, spent lots of time at parties, football games, and playing volleyball. But what most people didn’t know is that I was hiding. I was suffering in silence, because I felt like I had to be perfect to be likable. And that was the most damaging part of it all, staying in the dark.

As a kid I was abused by a family member and it always stuck with me. It manifested into low self-esteem, self-hatred, self-harm, an eating disorder, depression, anxiety, body dysmorphia and eventually suicidal ideations. I tried coping by self harming and abusing inhalants. I became compulsive and promiscuous for adrenaline highs. I lied maliciously to my friends and family because I was so ashamed of what I was going through. I felt like such a burden to those around me. And the weight was so heavy that I truly believed they were all better off without me. I began a downward spiral of depression and isolation, which led to many suicide attempts. I was in and out of psychiatric hospitals for at least three years. I faced so much stigma and shame for my struggles at times. People seemed to always have an opinion on medication, religion and mental health, or called me attention seeking. People told me that therapy was just an insurance scam, or that I needed to just have more faith in God. I was made to feel like a failure, and that there was no justification behind my pain.

When I was in college, I reached my breaking point. I was self harming every single day and starving myself. I would sleep in for days and miss most of my classes. My grades began to suffer and my relationships were in turmoil. I was in my dorm alone, when I decided it was time to end my pain once and for all. I felt like that was my only way out, and that people would move on from me in time. The attempt was my most dangerous yet. I remember waking up in the hospital being so angry with myself. Angry that I was still alive. But I had no idea that everything was about to change. With the support of great friends around me, I completed months of treatment. Some of it was inpatient, some outpatient, some residential. And eventually I began to realize that maybe I was surviving all of this for a reason, and that maybe there was a purpose through all of it.

What was critical to my healing included a strong support system of friends, activities that brought me joy, my faith community, spiritual healing and therapy. I credit all these things for saving my life. And while everyone is different, medication also helped me tremendously.

As I slowly began to improve my thinking, healthier actions followed. What I used to dismiss as impossible soon became my reality. Within time I got married, moved to Nashville, started my dream job, had a baby, and became a flourishing mental health advocate and peer specialist. I am still growing and maintaining my recovery everyday, and I am just so thankful to say I’m still here. I fought the good fight and it’s making me into who I’m meant to be. It’s equipping me to advocate for those beside me and educate those around me. It’s helping me make an ultimate difference in this life. And I have no regrets about that.

About the Author: Jessica is a 24-year-old Certified Peer Support Specialist, Case Manager, NAMI support group facilitator, and In Our Own Voice Presenter. After suffering from years of suicidal ideations and an eating disorder, Jess found healing through spiritual and emotional therapies. She has overcome her darkest moments with a determination to never let anyone tell her she cannot reach her goals.